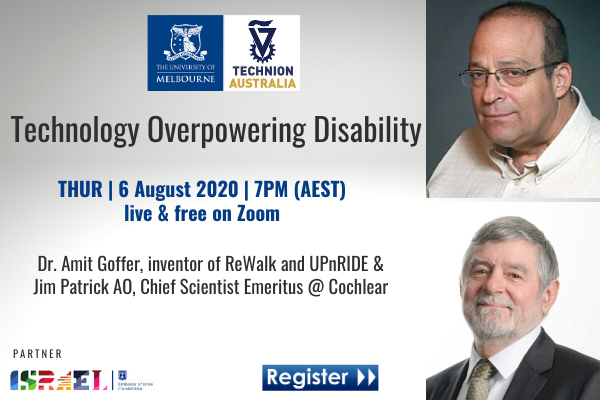 Dr. Amit Goffer experienced a tragic accident that confined him to a wheelchair – as an accomplished inventor and entrepreneur, he didn’t accept his fate to never stand up right again and immediately started to develop alternative modes of transport to the traditional wheelchair.

In 2001 he created the ReWalk system, the first commercially available exoskeleton. Due to the severity of his injury, Amit couldn’t use it himself, but hundreds of thousands of people could benefit from it. (Amit is a quadriplegic – ReWalk is designed for paraplegics).

More recently, he developed UPnRIDE to provide full mobility in a standing position in almost any urban environment. That is something that Amit, as a quadriplegic, has benefited from.

Technion Australia and the University of Melbourne are delighted to welcome Amit at our next webinar which will also include Jim Patrick AO, VP and Chief Scientist Emeritus at Cochlear. Cochlear is among Australia’s most iconic brands and has given deaf people the gift of hearing for almost 40 years. Cochlear designs, manufactures and distributes innovative hearing implants.

Jim has been involved in Cochlear implant research and commercial development since 1975, when he joined Cochlear Founder, Greame Clark’s research team. In 1981 he moved to Sydney as a member of the Cochlear “Tiger Team” inside the Nucleus group, developing a ‘clinically applicable’ Cochlear implant. He has been a member of Cochlear’s leadership team having at different times responsibility for R&D, Clinical Research and Manufacturing. Jim is considered a world authority on Cochlear implants.

Amit and Jim will discuss the power that technology has to overcome disability, the future of biomedical engineering and how to create an innovative culture.