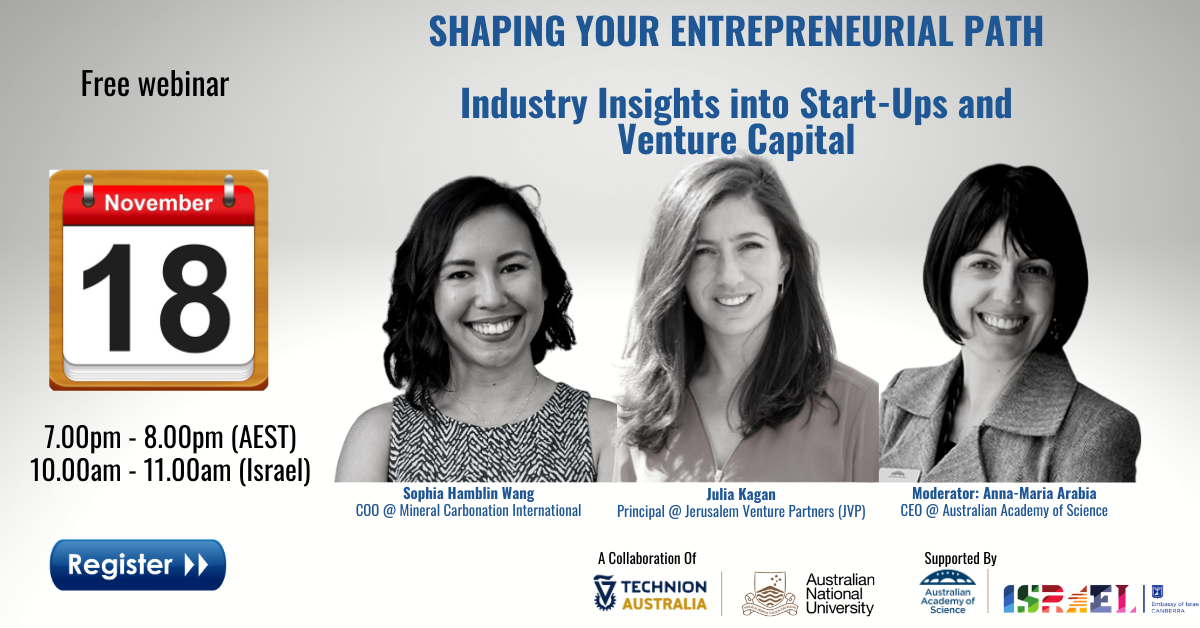 Technion Australia and the Australian National University Alumni Team are delighted to invite you to a conversation with three influential leaders who will share the do’s and don’ts of starting your own business, what you need to do to be noticed by investors and venture capitals, why more women in STEM is key to creating a stronger and more sustainable society, how COVID impacted the startup ecosystem, as well as learning from Israel – the StartUp Nation, which produces more Startups and entrepreneurs than anywhere else.

Technion – Israel Institute of Technology alumna, Julia Kagan is a Principal at the Jerusalem Venture Partners (JVP), among the worlds leading venture capital firms which specialises in investments in startup companies, focusing on Digital Media, Enterprise Software, Semiconductors, Storage and Cyber Security, having raised close to 1.4 billion US Dollars across nine funds. JVP is headquartered in Jerusalem, Israel with offices in Be’er Sheva, New York City and Paris. Prior to her role with JVP, Julia was the Business Development Manager of Leidos Israel and part of the executive team responsible for establishing Lockheed Martin IT operations in Israel. prior to that she spent six years in the elite Computer Security and Intelligence (C4I) unit at the Israeli Defence Forces as a Captain (res.) Julia holds an MBA from Tel Aviv University, and a B.Sc. in Industrial Engineering and Management from the Technion, graduating both magna cum laude. Within her role at JVP, she supports the partners in the investment process and works closely with companies post-investment.

Anna-Maria, is the CEO of the Australian Academy of Science. Prior to that she was a Principal Adviser to the Hon Bill Shorten, the past leader of the opposition. Previously, she was also a General Manager at Questacon – the National Science and Technology Centre; and CEO of Science & Technology Australia.

Anna-Maria will moderate the discussion and take questions from the audience.

* By registering to this webinar you agree to let ANU use your email address for the purposes of event registration and to receive information about similar programming, news and events
get tickets »
+ Add to Google Calendar